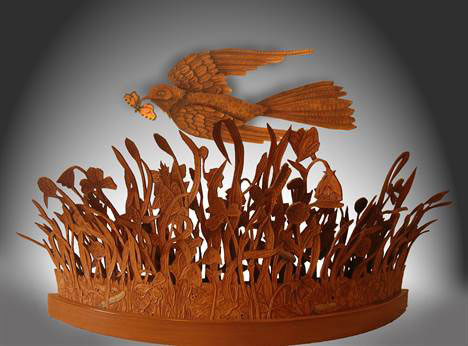 Rural Craft Re-imagined…champions British craft, celebrating the contribution of heritage craft to contemporary design. Our artists work passionately, with materials, themes or forms; they craft with expertise and ingenuity but their work is committed to traditional skills. Craft forms were selected for their importance in remote rural environments. All of the artists are extraordinary makers with national reputations:

Lizzie Farey is a willow sculptor and basketmaker who explores every aspect of the traditional craft of basketmaking, including growing all her own materials. Exhibiting widely in the UK and abroad, she has gained a strong reputation for her more artistic works. She says: “Willow has become a medium for an interaction with nature that is deeply personal. It is my inner voice and like the landscape here, a source of great contentment and calm.”

Pip Hall is a lettercarver whose work can be found in the landscape of the north of England and the borders. Working with communities, writers and other artists, her work celebrates our relationship with the landscape. Stanza Stones, a collaboration with poet Simon Armitage, resulted in a series of poems inspired by the language and landscape of the Pennine Watershed, carved onto stones across the upland.

Lynn Setterington is known nationally and internationally, for her work in textiles. Lynn became known for using Kantha embroidery (a wholecloth quilting technique from the Indian subcontinent) that uses contemporary motifs. The ordinary and overlooked are celebrated as key themes in her work.

A cabinetmaker by trade, Bill Robinson’s turned wooden vessels are created from both whole and segments of a wide variety of exotic and native timbers; laminated, turned and polished with the highest level of precision. His commissions have pushed him to make larger, more intricately ambitious pieces and the resulting works are masterpieces of colour and optical illusion.

A passion for the rural landscape of his home in Weardale, Co. Durham drives the work of Mark Rowney who works in leather using traditional saddlery techniques. The work is painstakingly carved and painted, with birds, rodents, insects and flowers, jawdropping in their detail. At first glance, these works look as if they are a product of a bygone era but the surreal images reveal a fertile and modern imagination.

Lucy Sandys-Clarke took over the ancient forge at Dent Smithy, South Cumbria after a five-year apprenticeship. She says: “I was interested in the grand and global traditions of the craft, but my heart did not lie in the scrolls, disciplined symmetry and stylised foliage of the great master smiths, but in something more elemental and organic.”

Workshops in local schools, masterclasses for adults, artist demonstration days, tours and talks will highlight the process of making, the role of heritage, the history of craft forms and innovation, giving the local community access to these world-class artists.