The Swallows and Armenians Story

Swallows and Armenians is a fascinating story of friendship and family, love and jealousy, with a good measure of sailing thrown in. The book by artist and author Karen Babayan has already been a highly successful touring exhibition.  This and theatre script development has been supported by two Arts Council England Lottery grants!  In July 2022 the book was finally brought to life and the actor-musician production was staged in the heart of Cumbria as part of the Cumbria Opera Group’s inaugural Weekend of Opera.  This production was performed by a multicultural cast whose own diverse backgrounds and family migration stories mirrored that of the Altounyan children. We now wish to take a full-length production of the show further afield to tour theatres in the UK in 2024. This project reappraises a children’s classic, uncovering and celebrating the ethnic richness of British culture.

Arthur Ransome’s Swallows and Amazons is a classic book about children having adventures on a lake. The Walker family have always been depicted as quintessentially English in the book, film and TV adaptations of the story; but what is not widely known is that Ransome modelled his characters on the Altounyans, an Anglo-Armenian family from Aleppo, Syria. Swallows and Armenians reinstates the cultural diversity of the children who inspired Ransome, delving into the very special relationship between the two families that also, spectacularly fell apart.

In 2022 with a diverse cast and original score, we created the newest addition to the Swallows and Armenians catalogue. Karen Babayan adapted Swallows and Armenians for the stage, in collaboration with Persia Babayan-Taylor, a director, actor-musician and composer. An original score was composed for the production by Persia Babayan-Taylor, with support from composer and musical director Madeleine Wilshire. This was a short 45 minute production in two acts, performed by professional actor-musicians to an appreciative audience of 220 people outdoors, over two days. Our new production in 2024 will be extended to 90 minutes and will be offered as a visiting production to theatres in the UK.

Fundraising for touring the show in 2024

We just at the beginning of our fundraising challenge and are looking first to our supporters to kick start this journey.  Your kind donations will go towards helping us pay the cast and crew, help to cover the costs of travel and accomodation and help to fund the set, props and costumes. Importantly, the money raised will also strengthen our applications for funding from grant giving bodies such as Arts Council England.

What will you get in return?

The satisfaction in knowing you have contributed to creating an original piece of actor-musician theatre that has an important message of inclusion at its heart and which brings a positive awareness of the richness of the UK’s diverse communities and their contribution to the cultural fabric of the UK. To help us raise much needed funds, please key the following URL into your computer search engine:

What did our audiences say?

“It was absolutely brilliant, well done for such an amazing play and to all of the actors that brought it to life!”

“What a wonderful afternoon we have had! Pass on our congratulations to them all and our thanks to you for providing some amazing culture in Appleby.”

“A wonderful and varied afternoon provided by some awesomely talented young people.”

What did our reviews say?

The joy of this family is beautifully captured in the music written by Persia Babayan-Taylor. The talented actor-musicians who presented this production are perfectly cast – Haroun Al-Jeddal as Roger, and Laura Andresen Guimaraes as Susie, dancing and playing, creating the happiness of a close-knit family. Marina Papadopoulos as Dora, playing mother and Arthur’s childhood friend is at the heart of the family. An English woman loyal to her husband, children and chosen culture. The energy and charisma of Titty is brought to life by Hanna Khogali and David Haller as the traditionalist Englishman and author, Arthur.

The dancing, the music and the pure joy of life that this opera celebrates, creates drama when juxtaposed with the anger of the arguments between Arthur and Ernest and emphasises the sadness of this true story. The intensity of the score for this part of the opera was carefully crafted to create the impact of the narrative.

Review by Karen Morley-Chesworth for The Cumberland & Westmorland Herald. 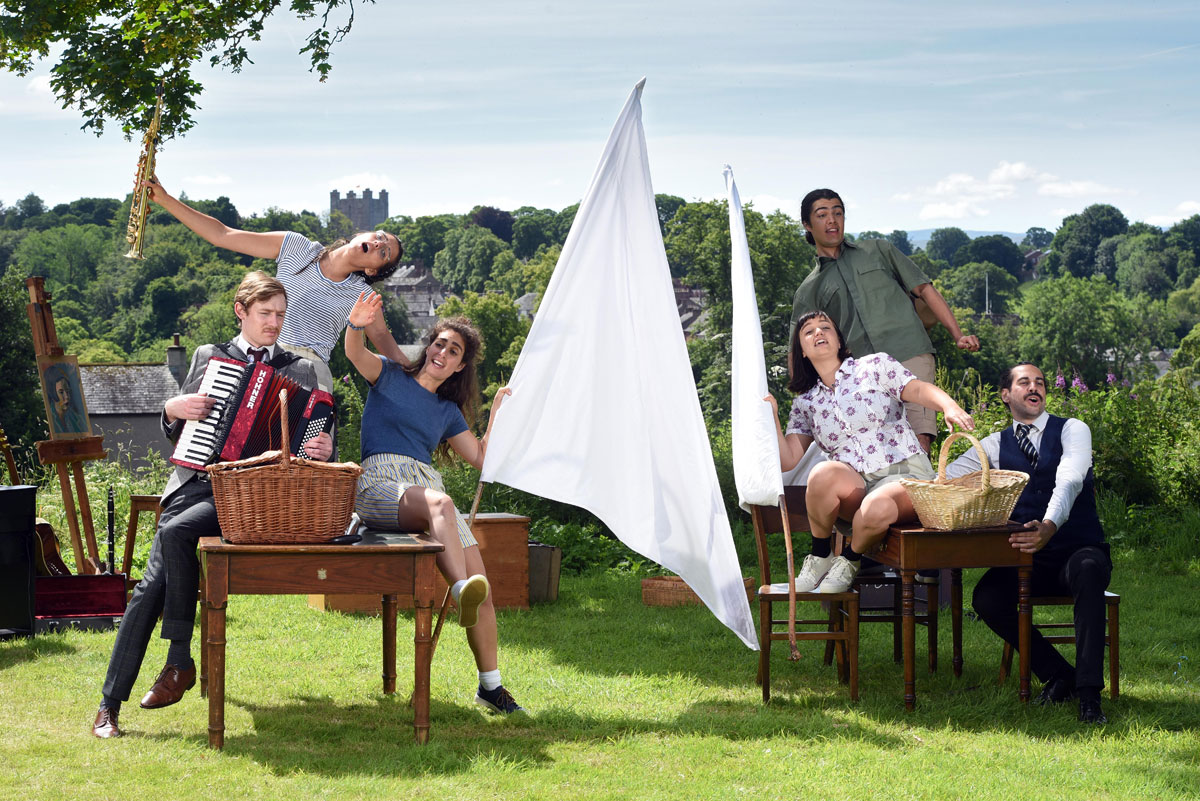 The cast and company of Swallows and Armenians, photo: Asadour Guzelian

Swallows and Armenians – the audiobook at £13.79 is available through audible

Swallows and Armenians – Flying the Nest 2020/21, the touring exhibition finally visited the Queen’s Hall Arts Centre, Hexham,  Northumberland after two delays caused by Covid and building works. The exhibition was their first since the 2020 lockdowns and the tour ended on the 20 November. As well as the contemporary works in photography, painting, print and wall-based text by Karen Babayan, the full collection of paintings by Mavis (Titty) Guzelian, Dora Altounyan and WG Collingwood generously loaned by the Guzelian Collection could be seen and included, for the first time, a new work The Swallow, an exquisite painting by WG Collingwood, which was kindly loaned by Teresa Smith, daughter of Robin Collingwood.

‘Swallows and Armenians – Flying the Nest’ 2020/21 further venues: the exhibition tour visited the Old Fire Station, Carlisle, Cumbria and The Maritime Centre, Newbiggin-by-the-Sea, Northumberland during 2020. The project received further Arts Council Lottery support for an audiobook, the exhibition tour across the north of England and the development of a theatre script.

Header image: The Swallow, by WG Collingwood, (collection of Teresa and George Smith)can be seen at The Queen’s Hall, Hexham 18 September – 30 October 2021.