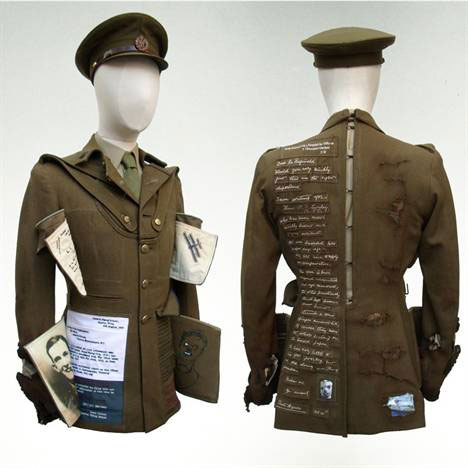 Textile Stories showcases three artists whose work brings to life real and imagined stories, told through the medium of textiles.

Paddy Hartley tells stories of courage in the face of adversity. His ‘Faces of Battle’ was the culmination of four years research, design and production in response to the Gillies Archives and the lives of the facially injured servicemen treated by Sir Harold Gillies during World War One.

His series of textile works of embroidered, laser-cut and embellished army and navy uniforms tell the harrowing yet inspiring stories of injured servicemen whose faces were reconstructed by this pioneering surgeon.

Stella Adams Schofield’s stories are of the dignity of daily toil and perseverence. ‘The Story of a Quilt’ is a personal response into North Country whole cloth quilting and an exploration of the processes involved in the making of a whole cloth quilt (made from a solid piece of fabric as the top layer).

Immersing herself in the cloth making processes of spinning and weaving to create the cloth that she has layered and stitched, Stella uses video and photography to record the processes and incorporates the still and moving images into installations that combine both textile and new media.

Although often simple in design, many of these quilts are stunning works of art, with great pride taken in the fine and even stitching.

Debra Roberts tells a fascinating story of the values of thrift and patience through the reconstruction of a late eighteenth century sack back gown. The dress, found in a box bought at an auction, has been carefully taken apart, the shadows of old seams and stitches carefully photographed and recorded and the dress, finally reconstructed.

The Sack Back Dress, also known as ‘robe a la francaise’ once at the height of late 18th Century fashion, had fabric at the back arranged in box pleats which fell loose from the shoulder to the floor with a slight train. Roberts’ fascination in the shadows of stitches and seams invites us to imagine who might have worn the dress and what their life struggles and celebrations might have been.

Work that is inspired and informed by the exhibition made by local schools and community groups during workshops, will also be displayed.

Artists will be in residence during two days of the show in each venue.